We have all been following the news in Tunisia, Libya, Bahrain, Egypt and that the unrest is largely led by citizens which are mostly student-led. The underlying issue seems to me misrule, corruption, inflation, unemploymnet, at intolerable levels... Many of us will wonder how much longer before many more countries join this revolution:). It is indeed very tempting and ideal to believe that such uprisings and unrest will solve the real problems. I do have my doubts, but they do, no doubt, serve as huge deterrents for subsequent leaders to amass wealth at the cost of governance.
Yesterday, I read Swaminomics which had another angle to the unrest. You can read the article here. It is very insightful and brings another set of dynamics into play in the region which is fraught with many, many problems and agendas for many countries to interfere and dictate their preferences for bringing so-called "Peace" to the region.
In the meanwhile, I wonder why the name "Jasmine revolution".. whilst the internet speaks of the various colour revolutions from rose to orange to lotus to white to green revolutions in various parts of the world, it is still not clear why this is called the 'Jasmine Revolution'. Can anybody throw some light in the etiology of the term?
Posted by Raji at 10:34 AM No comments:

Ah, Life in an Apartment!!

Like many of us in Indian cities, I live in an "apartment" and there are many greats to doing so! Well yes, sometimes, we do wish we could live in luxury of a "house", but as we all know, Antilia is facing a lot of flak and I would rather live in anonymity than be neighbours' envy:) 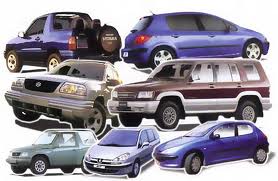 Anyway, getting back to living with a potpourri of neighbours, I just realised that life in an apartment can be a great leveler. For example, we have every single car of almost all companies in our apartment... we have the Nano, Alto, Swift, Santro, A-Star, Zen, Chevy Beat, Getz, Accent, Ford Fiesta, Corolla, Honda City, Ford Endeavor, Innova and the grand BMW SUV... What a range!!
All these manage to get parked and its fun to see these cars of all hues!! Being in Chennai, we have most models of bikes & scooters too!! 'wonder what their conversation will be if they can have one:-). Will it be as snooty / artificial, as their owners? Or will they plot to swap places for a day? Will they have role reversal games for entertainment? Will they help each other out in times of trouble?

Maybe we could make a Herbie movie out of these cars:-) Or better still would be a sequel to Chitty Chitty Bang Bang:-) Will be interesting, no doubt, any takers from the film industry?
Posted by Raji at 9:15 AM No comments:

Email ThisBlogThis!Share to TwitterShare to FacebookShare to Pinterest
Labels: personal

Had a lazy weekend with window shopping at Express Avenue and yeah, some real shopping too!! But the best part of the afternoon was the discovery of Goli Vada Pav in Chennai!! They have a small stall in the ground floor and I gorged on it... Amazing how childhood memories are so strong and latent.
I never thought I missed my vada pav much and infact having stayed in every metro since, I have become quite unattached to any city or rather attached to every city (depends on how you look at it, I guess:)), or so I thought... But Vada pav sure seems to have a permanent place in my heart, to use a cliche.
And now you readers might want to know if it was as good as the ones in the Streets of Mumbai... Well the verdict is Yes... I loved my vada pav.... but I wonder why they don't think the red powder is important to vada pav.. I had to request them to use it... Vada pav without the red thingy is like having Gujarathi dishes without adding the sugar component. Venky Iyer better train the Chennai fellows the nuances and speciality of Vada pav. But the vada pav capped my lazy afternoon and I came away happy and Dilkush, not for the purchases but for the Goli Vada Pav at Express Avenue..
I wonder why there were no big billboards about the Vada pav joint there, I might have almost missed it! I think it ought to have a bigger display announcing its arrival in Chennai
Posted by Raji at 9:06 PM No comments:

Email ThisBlogThis!Share to TwitterShare to FacebookShare to Pinterest
Labels: personal

Every city has its characteristics and Chennai is no exception. But it takes a non Chennaiite to actually list the telltale signs for Chennai or for any city, for that matter. So, here goes my list... You know you are in Chennai when
While the rest can be dismissed as quirks and culture or lack of it, of the city, the Bus day celebrations done by certain college students really beats me! Its highly stupid and is highly ridiculous... Apparently, the practice was started some years ago by students to thank the bus drivers and conductors (its always the local government buses) at the end of the academic year for having helped them commute to college. It actually has turned out to be the most unruly and violent days of the year. The students run amok (much akin to the animals in the sanctuaries and zoos) and disrupt traffic, make a nuisance of themselves and the police end up mute spectators. Is it a surprise that only the most notorious colleges in city observe this practice?? Speaks volumes of the real agenda of these celebrations
This year, the police acted tough and even the courts wondered if they could consider banning these celebrations!!! Like they consider banning jallikattu every year around January:-) 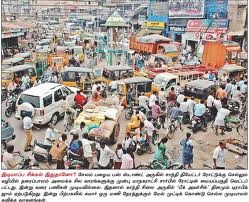 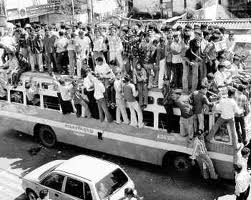 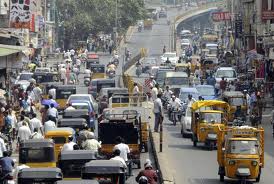 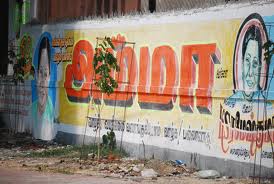 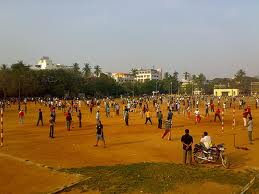 Some things never change for a city although one wishes and hopes it does!!
Posted by Raji at 11:31 AM 1 comment:

The cricket World Cup has just begun and media is doing its best to whip up a frenzy among the Indians to get excited and start breathing cricket, every moment, if possible. I am not sure if I seem to be to be missing something here! There is a marked lack of interest in cricket amongst us, as compared to 4/5 years ago... This, in my opinion is a very good thing.. We are having an overdose of it in terms of IPL and also increased matches between countries. And the scams and corruption in IPL last year has given cricket a beating:-). I, for one, am not complaining.
I always felt that our cricketers enjoyed a demi - God status in our country... Its rather incongrous and a number of other sportsmen who excel in their sport don't even get a mention in the papers or TV. This kind of correction or change is really welcome. Its a sign of a maturing population. Oh, I don't have anything against the Sport. Actually, I do enjoy watching the game but clearly it was an overdose and there's just too much of it.
Well, its not as if nobody is interested in the game, but the madness has considerable reduced. Its still early times and before we know it, two weeks from now, the nation may just be living, walking, talking, cricket! And many parents are really very worried.. the World Cup has barely started, there is just four days separating the finals on April 2 and this years' IPL!! And its bang at the time of final examinations. Many parents I know are unplugging the Cable Network but kids will always find their ways to work around such bans:-)
Posted by Raji at 2:49 PM No comments:

Indian Democracy - clarified by none other than Manmohan Singh!

I am so glad our Prime Minister clarified the current state of anarchy India finds itself in!! In his interactions with the media a couple of days back, he explained it all as, Coalition Politics... "My hands are tied" he cried:). How ridiculous and pathetic to hear your Prime Minsiter on National Television express his helplessness in the most abominable manner... Its bad enough to have him watch the goings on in silence, but to call the media and say that he can't do a thing, does carry it far.
This further vindicates my earlier post on Indian Democracy:-). What more can I want than the PM of India agree with me!
Sceptics will like to argue that besides having my blogpost vindicated, have I been successful in rooting out corruption?? Well, the answer is a No, for now... but I am positive there will be few readers who may like to join hands to fight the rot in our country today. We need a movement in our country and there is need for like minded individuals and organizations to get together and act responsibly.
Posted by Raji at 2:18 PM No comments:

The events unfolding in Cairo has lots of reason for us to cheer. I would think we in India can learn a thing or two from the citizens of Egypt. We may call ourselves to be the largest democracy and pat our backs on how great democracy in India is and if you meet NRIs, they even get romantic about it. But, its time we keep our intellectual exercise away and speak from our hearts. What kind of democracy do we have in our country today?
Have any of us been able to stem the rot when we see one? Can we be successful Indians without falling in line with the corrupt system that is ingrained into our country? Right from the electrical supply to the water connection to the gas connections to the telephone linesman, we need to "toe the line" if we want to get what is our Right. This is the state of our country. Is this democracy? Or is this anarchy? For anything and everything, you need a recommendation to get what is your Right, in this country.
Oh, we do justify and rationalise many of our problems to our huge population and the demand-supply ratio. But China with a more populous country is able to manage with better governance. They make no tall claims about being democratic. Atleast there is no hypocrisy. That to me is the biggest disease plaguing our country. We will rank very easily as the most hypocritical society in the whole world. We love to hush things up and not face the truths. We love to live in fools' paradise and not come to terms, even when we see the writing on the wall. We live in our past glories and love to blame the rest of the world for all the problems we have today.
I see a Cairo happening in the streets of Delhi and Mumbai very soon. And I would hail it, just as the whole world is hailing Cairo today.
Posted by Raji at 12:30 PM 1 comment: