Lot of us get to read Top 10 or 100 movies of the year or All time Top 100 movies.. Well, this post is a little different.. Here is my list of Top 10 movies that come to my mind as I set out to do this post today. So, these are not necessarily the 'Top 10' movies but movies that have a lasting impression on me 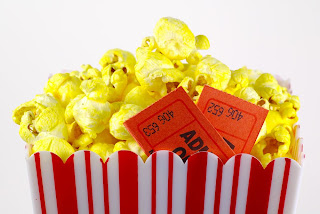 The list does look quite 'eclectic', but most of these are movies I've watched more than once and have been amazed at how involved and entertaining they were each time. if any of you haven't seen these, you must go watch them right away.
Posted by Raji at 7:53 PM No comments:

Finally got to see the movie Dasavatharam. Reviews were not good and lot of people gave me all kinds of stories on how disconnected the 10 roles were and etc.. I decided to see for myself and I must say I am glad I did that. Kamal Haasan makes intelligent movies and its a treat to watch some of them.. they don't necessarily do well in box office but are entertaining alright. Hey Ram was one such film. 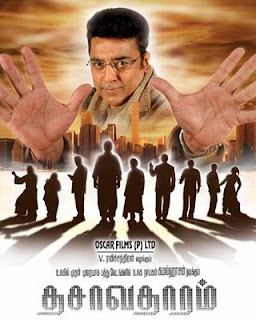 I am not going to give you the usual review - plot, story etc. Read standard review sites for that:). What struck me most with Dasavatharam was the details.. they were there, so subtle but there for the discerning viewer to note. And then again, the casual viewer can skip the details and still enjoy the movie for the apparent story. So, its a movie made with enormous intelligence, for all kinds of viewers. For the believer, he will come back with a very powerful feeling that the movie demonstrates the presence of a Super Power, God. Yet, an atheist can come out of the theatre feeling the bang opposite. Such a beautiful display of excellence in weaving a complicated story of Chaos theory with the theory of Karma from Hinduism, blended so perfectly. And still very contemporary... An enormous task that only Kamal Haasan can handle with aplomb and style. The details were things like showing the mangrove swamp through which the idol is taken before being immersed into the sea, which is the route from the temple at Chidambaram. Later, the scenes were all events that happened in and around this town. In any other movie, this detail would not be given much importance. And right through, right from the names of the 10 roles, they all had a comparable relevance with the Epic Purana.
All in all, its a must see for any viewer of Tamil films. I would end by saying that its an amazing story of a very complex theory captured in a three hour movie
Posted by Raji at 4:36 PM 4 comments:

There are two things that I need clarity on and I am sure there are a lot many people like me, confused.
1. Inflation: Not a day passes without any of us Indians hearing the word ‘inflation’. Newspapers, TV channels, magazines vie with each other to capture our attention with screaming headlines on this topic. And then I hear a financial expert being interviewed on CNBC the other day and she said with conviction, “Inflation is actually good”. Now I was taken aback. Since I was passing by the room when this statement was made, it made absolutely no sense to me. But this lady is some financial expert which is why she is being interviewed on prime time, so while I cannot dismiss her statement I would like somebody to explain this to me.
2. Dollar vs Rupee: A couple of months back, the dollar weakened against the rupee and the papers were full of all kinds of apprehensions about the economy getting hit and profit margins of IT sector getting affected. But my point was always that our exports are negligible in terms of our imports. Our crude imports are so high that a weak dollar should be good for the country!! (we will be paying less for the same quantity of crude) Do I make sense?
But the economists and so called knowledgeable community think otherwise. So much so, that finally, RBI intervened and stabilized the $ at levels they thought were good for the country. Can somebody please explain this mystery to me?? Why should a strong dollar be good for India??