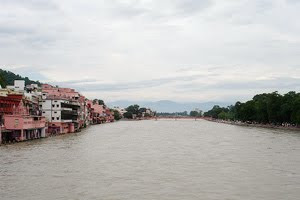 Couldn't resist blogging about this!! Our dear Jairam Ramesh, Minister for Environment and Forests, often shoots from the hip.. but this is really the best I have read so far... He says very grandly that he will ensure a free-flowing and clean Ganga by 2020!!! His government will pump in 15,000 crores towards this. Wow, isn't it?

Does he read the papers about the alarming rate at which Gaumukh, the glacier from which Ganga gets its water, is receding? You can read his article that appeared in IE. Honestly, it should have appeared in the Comic Strip section:-)

Reasonable estimates suggest that by 2025, the Ganga will cease to be perennial river and instead become a seasonal river. But our man does nothing to stop the receding glacier but is going to pump 15,000 crores to save a river that will be non existent for most months in a year, if we don't take corrective steps.

What a bunch of ignorant people run this country.. we have one minister whose tweets make more news than his performance in office. We have another whose sense of priorities leaves one dumbfounded (the article above). We have another Minister who spends more time in her home state - as a CM-in-waiting role than the Minsitry she ought to run.

Media and their sense of right and wrong

Oh yes, I was not to post anymore this year but the news headlines about Ruchika and Rathore everyday for the past week has me irritated.... What's with the media and activists?? Why do we go after such stories like its the most important thing?? Alright, Ruchika was wronged and the culprit was influential and had his way in getting a light sentence.. So, what's new about this??

Often, the media simply goes beserk, thanks to so many 24/7 'news' channels and websites and each vying for some exclusive scoop. The Judiciary was always the system we learnt to bank on (they are sadly not so dependable), but when they pass a verdict, we raise a hue and cry.. Yes, we can protest against injustice, but media need not carry it as main headlines everyday... A colleague of mine very rightly remarked, "At this rate, we need not have courts to decide punishment, we can have sms polls and pass judgments much like the reality shows on TV".

Take the Arrushi case for example, nobody knows what happened to it, but the media behaved like they knew it all for one month and bored us to death. Now, why aren't they getting to the bottom of everything? Does the media want to play the role of the Police? Same with N D Tiwari. God knows if the news was real or it was a frame up, but before the truth is known, the media splashes it everywhere and he is declared guilty and the public is forced to read such news... And what really saddens me is that every media house has fallen to this sub standard journalism. The public has very little to choose..

I do wish the media barons get together and put an end to this nonsensical way of reporting. The media is a very powerful tool and can shape young minds and also has the power to change the mindset of public. I do wish, they have a conclave soon and decide to become responsible media channels and effect a positive change in 2010.

Am I asking for too much?

On the whole, its been quite a listless year, and if one were to go by what we read in the papers / internet, its a not a rosy picture anywhere in the world. There seems to be more chaos and greed and disasters and what have you, these past 12 months... Even, personally, its a year I am glad to see the back of. Being the eternal optimist that I am, I do hope for good things to happen to everybody and to the World, in general, in 2010.

There seems to be a big disconnect from the real big issues facing the world, instead we seem to be focussing on petty squabbles, therefore, losing sight of the larger picture. This seems to be a Universal phenomena and all of us are culprits and victims of the same thing:-). From food shortages to pointless wars to unwarranted war posturing by some countries to scary terrorism, its all there in 2009.

How to effect a change? As Mahatma Gandhi very nicely put it, "Be the change you want to bring about". If even a few of us take this quote very sincerely, 2010 will be a far better year than 2009.

On this rather optimistic note, here's wishing you all a Very Happy & Joyous 2010!

The Global Foundation for Civilizational Harmony (GFCH) organized the second edition of The Hindu Service and Spiritual Fair in Chennai this week. You can read the news clipping explaining the initiative, for details. Basically, this fair brought 122 organizations under one single roof, to showcase their service projects and objectives. I was volunteering in the Art of Living Stall and was interacting with the organizers. I am so impressed by the commitment to the cause they stand for. Each of them are professionals in different areas and have taken ~ two weeks off to put this fair together. I am so inspired and motivated by these people. Some have taken their annual LTA to organize this fair.

It was very nice to move around the stalls and learn about the various service initiatives done by so many organizations. It leaves one with one big Hope, that all is not lost. There are many people in this world who still are engaged in selfless service.

We, in the Art of Living, had a stall and I have uploaded some of the snaps taken at the stall. Check these links out to get an idea of the rationale for such a fair.

The Secret of Success in India

I was listening to an interesting discussion on Radio the other day and the topic was "Success in India is through Merit or Influence / Luck". They had invited an editor of a newspaper, there was Ganesh Venkataraman and Ms. Sabesh, both actors.

I realised from the discussion that it was a take off from my earlier post. While it takes merit to excel in one's area, its influence or luck that gives most successful people their first break or entry. This was echoed by all, albeit reluctantly by some of the guests. So, what's new, you may ask.. its certainly not new but its a very unfortunate, disturbing state of affairs.

This has big repurcussions on the social fabric of our society as this leads to the proliferation of corruption, people breaking rules, government unable to implement laws of the land, etc. etc. Its a big hindrance for India to break out and join the group of powerful countries.

Ever wondered why this culture has crept into our lives, yes, every one is responsible and party to this 'culture'. Its not fair to blame the politicians or X,Y, or Z for the state of affairs. Well, its because of a lack of adequate resources for everyone to get what he/she wants - right from choice of school, college, job, train ticket, etc etc.. And the big reason is our explosive population. If only, each of us can take responsibility and control our population, India has a great opportunity to become a force to reckon with, in the World!

Spiralling cost of Food! - my perspectives 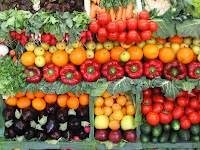 We have all been experiencing steady rise in prices, from rice to pulses to vegetables. Papers are full of theories and so our our enterprising vendors:-). Its really amusing to hear them give their reasons so emphatically. Once I was told that the vegetable prices shot up since Karnataka and AP witnessed unprecedented floods and trucks couldn't move and so the prices were up... Three months later the same guy tells me very earnestly, there was heavy rain in Ooty and landslips and so vegetable prices have gone up! I am amused and also confused and I wonder where the vegetables to Chennai come from??

And if you readers remember approx prices of commonly consumed vegetables a few years ago, there is a very interesting trend.. Beans, carrots and potatoes and tomatoes, lady's fingers were all at one price band of Rs 15/Kg while capsicum, baby corn, broccoli, zucchini were all at Rs 35 / 500 gms. Now, this price rise has come as a great leveller, all veggies - common and rare, are now on par, >Rs 40/ Kg. Wonder why / how...

Also, this price rise, rather inflation, has other interesting observations too. Prices of essential commodities have gone up 100% in most cases this past 1 year while non essential goods like digital camera, dvd player, memory stick etc. are crashing... Reminds me of a conversation I was having with somebody who had returned from Tokyo. He said, a watermelon costs more than a fancy watch there!!

A couple of months ago I had a post on Perception and Reality written on a light vein. But today, I am in a quite sombre mood and I wonder what is Reality, after all... I mean, our views and opinions are all about perception and completely relative. So what is real?

This question is particularly in the context of the TRS movement for a separate Telangana and their leader chose to dramatically do a fast unto death till their demands were met. Most people, from family to colleagues, all quite diverse, were of a similar opinion that it was unfair to put pressure on the Government and disapproved of the manner in which he almost blackmailed others to get what he wanted.

Now, this is exactly what Mahatma Gandhi used to do, I remember reading about his innumerable 'fasts unto death' and they were always referred to as an act of non violence / ahimsa and we were taught that it was virtue that only Mahatma had. How come this virtue, enacted by another, in this case, Mr. KCR, is called blackmail??

Now, it will be interesting to see how History books treat KCR:-) 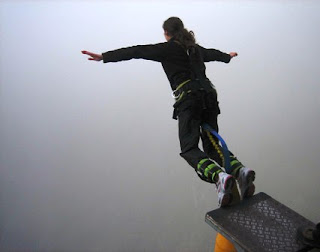 What triggers activity in people and spurs them to go one notch up or many notches up? I mean, very often, most of us love to get into our comfort zone and keep growing, career wise, but maybe only at a Hindu rate of growth:-). What makes or triggers people to make quantum jumps in their lives? Ever wondered? If you notice, its people who make these leaps who really make a difference in their sphere and get noticed and end up leading very satisfying lives.

Oh yes, you got it, your truly, is now contemplating taking one of those leaps soon. Time will tell, if I rise above the tide and ride the waves or just float like driftwood:-). There's something cooking in my head and still not ready to get off the diving board! Curious? then watch this space..