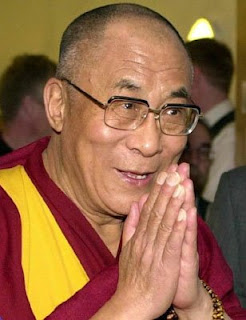 As promised, here goes the Q & A with him. The first question was on the Sri Lanka conflict; since it was a Buddhist country and he is a Buddhist leader, what role does he see for himself to bring peace in Lanka. He answered simply.. "it is impossible for me to do anything there.." he elaborated by saying that he attempted to visit Sri Lanka way back in 1960s and just the day before his departure his programme got indefinitely postponed and to this day he has not visited Sri Lanka!!! However, he said, as Nobel laureates for peace, a few of them were going to get together, namely, Desmond Tutu, Nelson Mandela and himself etc. sometime next month in South Africa and put pressure together, to bring long lasting peace in Sri Lanka.
One interesting question was to share his most unforgettable experience... he shared a few which I shall elaborate. He said he was a lazy student and he and his brother had joint classes from age 5. Apparently, the tutor had 2 whips - one holy yellow whip and an ordinary whip. He said, but a whip was a whip and it inflicted pain:-). His most unforgettable experience was when he gave his last exam. He said he was so relieved he didn't have to study any more!! and he said he also felt grateful at the same time! Soon after, he had to flee his country and reached the Indian border in less than 24 hours. He said while in China, they could not openly criticize China and their policies but after reaching India, he spoke to his mother and sister and criticized China policy loudly for the first time:-) and felt good about the 'freedom of expression' in India.

He ended by saying that although he was a lazy student himself, his message to the youth was to be enthusiastic and work together towards making the World a better place. He said it was inappropriate of him to ask students to do what he didn't as a student but he felt that the current situation so demands that youth need to get proactive:-). He was so genuine that it touched everybody's heart.

There were few more questions and the last question brought forth a very humorous answer. He was asked if he believed in Tibetan medicine and if he did anything to promote it in any way. He replied by saying that he had full faith in Tibetan medicines and that all those present there must check out Tibetan medicines. He then said, however, that they don't have a cure for gall bladder stones... Apparently he was diagnosed with gall stones a few years back and was falsely led to believe that Tibetan medicines will dissolve them for him. Alas, he had to resort to allopathy and have his gall bladder removed recently. So, he said Tibetan medicines were good for chronic ailments like Diabetes, Cancer, AIDS etc.

All in all, a two hour interaction with Dalai Lama was a treat! He came out as such a humble, simple human being... One of his memorable quotes were... "Measure your success by what you had to give up to achieve what you did".
He called upon all present to reflect on what he said as that was the most important aspect of education - reflection.

Posted by Raji at 10:26 PM No comments: Links to this post 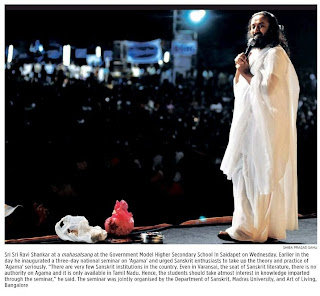 Well, Guruji came to Chennai for a Maha Satsang after a gap of two years and what an evening it was... Being a part of the organizing team, there was so much activity as run-up to the programme and so much fun and learnings! We had a full house at the Teachers' College Grounds on the 28th. We had a taste of Music, experienced meditation which was followed by plenty of Q & A. Guruji stressed on how imperative it was for all of us to get together on the genocide happening in Sri Lanka. He said, in the past two days, >800 innocent civilians have died in Sri Lanka. He asked us to all work on getting a ceasefire and end the conflict through dialogue.

He asked the youth and all present to take a day out every month for Service. He said this was the only way to end poverty. He called upon all of us present to organize ourselves and get started with Service programmes in groups of 10 /15 and Make a Difference to Society.

Posted by Raji at 10:04 PM No comments: Links to this post

Messengers of Peace in Chennai

I was quite excited to hear H.H. Dalai Lama in the University of Madras on 21st Jan 2009. His talk was on Peace and Happiness.. so apt and important in the current scenario. I personally was struck by his amazing humility and clarity in thought. He spoke from his heart, with such feeling and genuineness, that was obvious to all present.

He very beautifully brought out the point of Human Values being beyond the domain of religions. He said, its basically a combination of a biological function (caring, affection as shown by a parent to a new born - not restricted to human beings but in the animal kingdom), Mind (realisation and awareness of Reality). He elaborated and said that a biased mind cannot see reality. He said that modern education pays too much attention on the development of head, but not much on the heart.

He had a message for the youth, 21st century belongs to us. He said the youth were the foundation to create through education, a Peaceful World. He said there were 3 types of education - education by learning / hearing; education by reflection & education by meditation. He said the second was very important - to reflect on on all that one reads and hears..

There were some memorable quotes and stories of his personal life that I think I will share on my next post. To use the cliche, watch this space!!

To continue on this note, I would like to invite readers to an important Event on 28th January at the Teachers' College Grounds, Saidapet, Chennai to make our Stand for Global Peace in the presence of H.H.Sri Sri Ravi Shankar at 6.30 pm 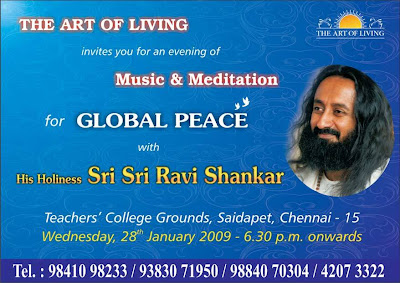 Posted by Raji at 11:04 PM No comments: Links to this post