It was an interesting Republic day for me. I spent most of the day at the 4th edition of the Hindu Service & Spiritual Fair in Chennai. I have always visited the fair each year and always notice that with each year, there are many amazing changes and improvements and an extremely sincere effort by the organizers to bring as many Hindu organizations together.
This year, its happening at the D. G. Vaishnav College, Arumbakkam campus. As I strolled along, I reached an interesting corner that had an artificial banyan tree named as Sanathana Dharma tree! And from its branches, dangled little cards that bore the names of all participating organizations!! It was a lovely idea. And against the backdrop of this tree, were about 10 kids from class V and VI, from SDRF Vivekananda School, Chrompet, that were cutely dressed up as various heroes of India. And as one neared any of them, they would stand and talk like the hero they were dressed up as, with a fervour and enthusiasm that was so cute and infectious! I enjoyed my time with the kids there, speaking like Bhagat Singh, Subhash Chandra Bose, Katta Bomman, Jhansi ki Rani, M.S. Golwalkar, to name a few. 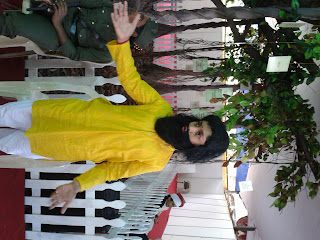 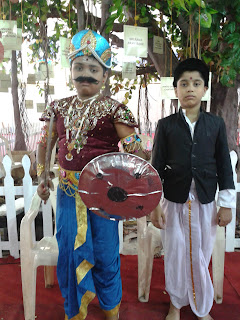 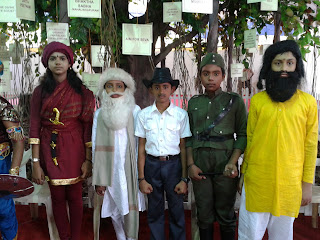 I realised how as children, we grow up reading about inspiring heroes with such lovely ideals and values, only to be lost as we exit our teens and start out on our professional courses. And such fairs bring us back our old school memories and idealism back. Hats off to the organizers for doing a fabulous job. I only wish I could take time out as many of them, and spend more time.
Posted by Raji at 4:43 PM 1 comment: Links to this post 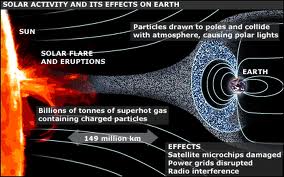 Aren't we a lttle bored of the happenings around us? Right through 2011, we saw Arab Spring, US autumn, Occupy Wall Street style protests across the world. Back home in India, we had anti-graft campaigns by Anna Hazare that made news headlines 60% of the year. We did have many other campaigns, the perpetual Telangana stir, anti-nuclear protest, anti- genetic modification protest etc etc.
To add some entertainment, we had shoes hurled at leaders, ink thrown at people, people being man-handled, slapped too:-). No wonder, the song kolaveri (means murderous rage in tamil) went on to become the song of the year, as it kind of captured the mood of the people.
But friends, 2012 promises to be a different entertainer. I think we can brace ourselves for unexpected surprises from Nature! As we near the solar cycle - maximum in the 11 year cycle, we can expect many solar flares and storms. While, NASA has assured all of us that its pretty normal to experience these sun storms, as the sun approaches its "solar maximum" in May 2013, we are seeing very high and intense activity, already. This makes way for many theories to get re-floated and I am doing the same by re-posting the link to one of my earlier posts on the Earth Axis tilt that is doing the rounds.
While, I am a firm believer in the continuity of life, and never will fall for any doomsday predictions, I do think there's going to be some interesting events happenning in the next 12 - 15 months. There seem to be many pointers to this possibility. I would like readers of this post to check out the following stories.
http://www.polereversal.com/
http://www.crawford2000.co.uk/mag.htm
http://www.nasa.gov/topics/earth/features/2012-guest.html
So, lets brace ourselves to an adventurous 2012:-)
Posted by Raji at 11:47 AM 1 comment: Links to this post 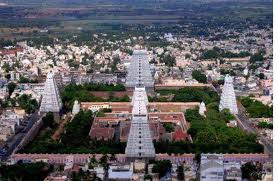 Its been more than 10 years since I have had this deep longing to go to Thiruvannamalai, a celebrated abode of Lord Shiva, representing the fire element. Its just a day journey from Chennai, where I live, but it never happened. Finally, HE organized it all for me, and in grand style!
It was all like perfect timing, right from the start. We entered the temple and the deities were being led in a procession, a regular ritual, but it felt as if the Lord came out to give HIS darshan. We took our time to enter the main sanctum sanctorum and before we knew it, a priest led us toward the Lord and took us right there, just within a foot of the Lord. Whew!! We spent precious time at HIS feet and left with our hearts feeling full. Later, I gathered he was the Chief Priest of the temple and had been serving the Lord for the past 60 years! He then took us around and gave us a similar darshan of the Goddess too. It was such an unbelievable darshan, we all felt so special, it was like it was all planned and organized for us. There were hardly any crowds and the temple appeared to have just us:) 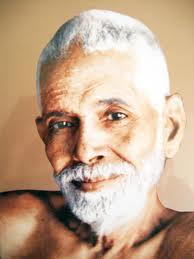 Ramana Maharishi spent most of his life meditating in this temple and so we ended our trip by going to Ramanashramam. There too, we were just on time, for lunch was being served and we had prasad. We rested and meditated  at the meditation hall and were thoroughly refreshed with just a few hours we spent there. Such was the calm inside.
The Lord does know how to make us feel special and chosen. What a perfect day it turned out!

Reminded me of what H. H. Sri Sri RaviShankar ji says, "Faith is giving the Divine a chance to Act". Experienced that in abundance.

Posted by Raji at 2:23 PM No comments: Links to this post