A ray of hope for Indian Scientists, at last!!

Finally, the PM has spoken on the Bt brinjal isue and I am indeed glad that good sense has prevailed. He has taken a firm stand and has clearly spelt out the need to have a time frame and not a moratorium as Shri Ramesh had decided. I am so glad. Readers must read the full article.
Infact, after the circus of consultations across the country and the nonsensical arguments I was glad the commercial release of Bt brinjal was put off... because in the face of so much opposition, its better not to release the first edible GM product, the reason being, even a weather failure or wrong practices of the farmer would have been attributed to Bt brinjal as the villain:-)
Having said that, I was also concerned that the Minister fixed no time frame and did not identify the Institutes to do the tests he wanted nor did he specify on who the onus was to improve public acceptance. But this article in the Indian Express from the the PMO has really brought some light on this issue for us, scientists. I was so disillusioned these past few weeks that I was wondering the purpose of my research. Infact, I asked Shri Ramesh this very question of a need for time frame... He, as expected, evaded the question and said it could be weeks to months..
So, its party time folks!!
Posted by Raji at 12:44 PM 2 comments: Links to this post 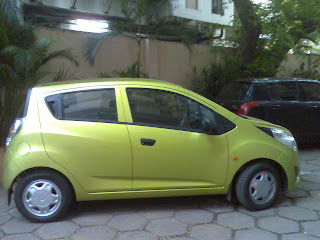 After a serious post, let me give you all a break with my first impressions of the Beat. I have been driving it for about three weeks now.. it sure feels much nicer than the Zen. I mean, its definitely more powerful as its a 1.2 cc engine and the higher seat gives me a better view of the road. The Beat design is great and I still get looks at every signal I stop and from passers bye. Also, I went for 'cocktail green' colour that quite stands out on the road:-).
The interiors feel good and I have gone in for a nice Pioneer music system that complements the Beat looks. Still need to add a few accessories and jazz it up a bit. The frontal view is a tad ugly, but on the whole I like the design and have grown to accept the bulky bonnet. I guess the roof rails and rear spoiler that I plan to add will make it look even nicer.
No, I have not checked the fuel mileage yet, its hardly done 500 Km; although that's almost the first question I get from most people. Nett, it looks like a good 'value for money', so far.
Posted by Raji at 10:34 AM 2 comments: Links to this post

Since there is so much talk about GM foods, here is an attempt to demystify the technique and explain the process and methodology.
What is a gene? A gene is a part of the DNA that codes for a protein. The DNA of an organism (genome) is huge and only ~ 5% of the genome codes for proteins. The remaining part of the genome is still an enigma for scientists and there are only theories and conjectures on their possible roles.
What is DNA? DNA is the hereditary material that is passed on, each time a cell divides and makes new cells. The main role of DNA molecules is the long-term storage of information. DNA is often compared to a set of blueprints or a recipe, or a code, since it contains the instructions needed to construct other components of cells, such as proteins and RNA molecules. DNA, is highly conserved and we share common genes and sequences across organisms, from bacteia to plants to animals. The simple dogma in genetics is - DNA contains genes, which in turn codes for protiens.

Through genetic engineering we clone one gene of interest, into the genome of the host cell and study the expression level of the cloned gene. For example, in my lab, we have cloned genes for conferring tolerance to salinity and drought. So, we have integrated these genes into local varieties of rice. We at first grow them in test tubes and then pot them and those plants having the desired genes, we collect seeds and monitor in subsequent generations.

I would like to emphasise here that plants that cannot grow normally and set seed are automatically weeded out in the laboratory itself.

That's it for now. Do let me know if this is in simple language or should I keep it more simple.. In my next post I will explain how we decide the more promising plants that we call transgenic plants, and screen them for gene expression.
Posted by Raji at 10:18 AM No comments: Links to this post

Email ThisBlogThis!Share to TwitterShare to FacebookShare to Pinterest
Labels: science

The DNA of GM foods... the Basics

I think its a good idea to explain the technology and as Julie Andrews would say in Sound of Music... "Lets start from the very beginning...."
So, I am going to start form the very beginning.... by explaining what DNA / gene / expression / modification etc... actually mean. I also intend to describe the process, in as non technical manner as possible, for easy assimilation.
I ought to have done this much earlier and I am quite excited at the prospect of writing about it, now. Watch this space.
Posted by Raji at 4:56 PM 3 comments: Links to this post

Email ThisBlogThis!Share to TwitterShare to FacebookShare to Pinterest
Labels: science 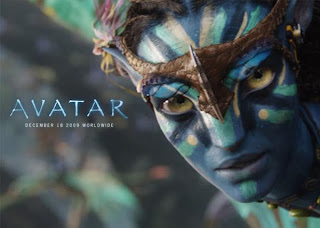 Finally made it to watching Avatar in 3D. Its simply a Wow experience. I am now so looking forward to watching regular TV in 3D. Apparently, IPL - 3 is going to be telecast in 3D. I thoroughly enjoyed the movie. All those who have enjoyed movies like Star Wars, Lord of the Rings etc., will definitely love it..
I did check out 2D of some scenes and it was still good. But the 3D effect adds to the overall impact and is certainly not to missed. James Berardinelli says, this 3D effect is called 'immersive'. I kind of understand why... as audience we feel so much part of the movie that, after the movie, as we headed out to the basement to the parking lot, I almost felt I will now feel breathless in the basement as one of the final scenes was very similar:-).
Just head out and treat yourselves to this movie
Posted by Raji at 2:23 PM No comments: Links to this post

Science is the Casualty

I cannot but continue to post on the controversy surrounding Bt brinjal release. It really pains me to see that the so called 'consultations' that the Environment Minister is having across the country, has all ingredients except, Science. These consultations should have been held to share the concerns and thoughts of all stakeholders and have meaningful dialogues, so that everyone can benefit and misconceptions and myths can be cleared. However, Science has been taken out of the Consultations and its one big jamboree with people either 'for' or 'anti' Bt brinjal.
The very purpose of the Consultations have been defeated and there are many more misconceptions in people's minds today than there were before!! Secondly, our Environment Minisiter can also 'not' take the decision based on these Consultations. He has no locus standii to do so. The GEAC is a statutory body and he, at best can give his recommendations based on 'his consultations'. The whole thing has been a big waste of time and he will, at best ask the GEAC to conduct more tests and postpone the commercial release of Bt brinjal.

I would like the people who are against Bt, to also be against many other things, like nuclear energy, irradiation of foods to increase shelf life, GM medicines, all forms of allopathy including paracetemol to anti histamines as they can cause allergies in some people, cellphone usage (as it causes cancer), drinking tea / coffee, consuming milk as the cows and buffaloes are injected with dangerous hormones, travelling by air etc. etc. because, all these are either risky or have been linked to cause health hazards.
Posted by Raji at 11:39 AM 2 comments: Links to this post