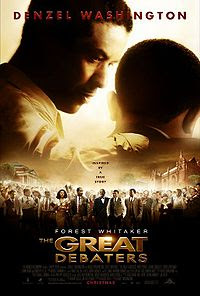 A really powerful and inspiring movie... Recommend it very highly... Easily one of the best movies I've come across in recent times..

Its set in the 1930s and captures the racial discrimination prevalent at that time in the US and maybe still there to a much lesser extent. I was shocked by many of the scenes in the movie. For eg., do you all know that Blacks were not admitted to Colleges and Universities where whites studied. They had park benches with signs "Whites only". Of course there are more scenes of the cruelty and humiliation that the blacks underwent, in the movie that will shock any civilized society today.

Given this background, the movie is about the highly competitive world of the debating socety in US Colleges and Universities. Its based on a true story of how a debating team from a black Wiley College from Texas goes on to win the best, reigning debating champion team (white) at Harward.

There are amazing dialogues in the movie that I will capture in this post. However, I suggest all readers to definitely watch the movie:-)

This is from the final scene where the debate topic is Civil Disobedience and Wiley College team is asked to debate in the affirmative...

James Farmer Jr.: In Texas they lynch Negroes. My teammates and I saw a man strung up by his neck and set on fire. We drove through a lynch mob, pressed our faces against the floorboard. I looked at my teammates. I saw the fear in their eyes and, worse, the shame. What was this Negro's crime that he should be hung without trial in a dark forest filled with fog. Was he a thief? Was he a killer? Or just a Negro? Was he a sharecropper? A preacher? Were his children waiting up for him? And who are we to just lie there and do nothing. No matter what he did, the mob was the criminal. But the law did nothing. Just left us wondering, "Why?" My opponent says nothing that erodes the rule of law can be moral. But there is no rule of law in the Jim Crow south. Not when Negroes are denied housing. Turned away from schools, hospitals. And not when we are lynched. St Augustine said, "An unjust law in no law at all.' Which means I have a right, even a duty to resist. With violence or civil disobedience. You should pray I choose the latter.

Then there is the scene where the debate team begins their coaching under Mr. Tolson..