And the TGV can also run late

I had one of the most eventful journeys till date, it was my trip back home (Chennai), from Paris. I thought I had it all sorted, was traveling back in Emirates, one of the best airlines, did the web check, the previous day and was all set. Or so I thought... however, something went terribly wrong in my plan.

I was visiting the University of Tours, which is south east of Paris and a TGV takes about 100 minutes from Tours to CDG airport. So, I kept a generous allowance of an extra 120 minutes before I needed to show up at the airport. I was told by my French friends that the TGV is always on time and 120 minutes was way too comfortable. I believed them and was envious of the confidence and pride they had for their railway network.

It was the first train to leave St. Pierre de Corps (near Tours) to CDG, on a cold Friday morning in December, the beginning to the Christmas break. All the passengers seemed to be headed home, to be with family and there was festivity and cheer all around. Just as I was told, my train pulled in to the station, on the dot. We settled in, and I was looking forward to getting back home, just like the rest. 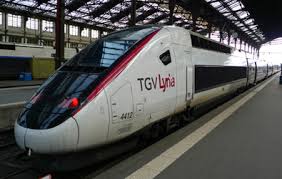 After about 15 minutes, I heard some announcements on the public address and I heard names of stations being listed, that were en route. I kind of patted myself for understanding their accent and was pleased with my progress with this ten day sojourn in France. Soon after, there was a station and most people trooped out. Soon after, I noticed the train was as fast as a slow, local train in India and I was feeling cheated for paying for a high speed train.

Soon, the train came to a complete halt and it seemed to be in no-man's land. Co-passengers seemed unperturbed and I heard another set of announcements in French. I finally decided to ask around and have them translated in English. It was amazing, how young and old alike, didnt know any English. They just stared back at me with an uncomprehending look. There were boys, aged 16/17, girls about the same, women in their 40s and men likewise. All of them looked puzzled when I asked, "Is the train running late?" in plain English. Finally, a Belgian girl came to my rescue, she understood French and a little English and I was finally told that the train was late and complimentary refreshments were being served in the upper deck! I asked "how late" to more blank faces. Finally, a gentleman at the far end of my coach came up to me and said I must speak with the Captain of the train who would hanging around, near the bar on the upper deck!

I trooped up and found a couple of them, in uniform, enjoying a drink and seeming very pleased about the train being late. I asked them if they spoke English and they nodded. I gathered from them that the train would reach the CDG, 150 minutes late!! Ah, well imagine, I kind of freaked out! I told them I had a flight to take and they coolly informed me that an announcement was made about the train running late and hence passengers travelling to CDG and those who wished, could board another slower train, at a particular station (I chided myself for thinking they were announcing the route the train was taking, much like the Kolkata mini bus conductor:-)). I mumbled something and managed to censure them for making announcements in French and not multi-lingual. The Captains seemed unaffected and agreed that I may not have followed the announcement but there was nothing they could do, except shrug expansively, one even helpfully offered, "Change your flight".

I went back to my seat and was wondering how to handle this unexpected situation. All my passengers showed a little more empathy now and seemed as concerned. With the help of the Belgian, I managed to get a French student to get me the Emirates number on his phone as the Belgian could'nt use hers, just like me (no wifi!!). And I unsuccessfully tried explaining my predicament and the lady on the other line kept repeating that I could show up 90 minutes prior to departure. I gave up. As my last resort, I called my husband back home, in Chennai and asked him to talk to our travel agent who would ask the Emirates staff in Chennai to see reason with their counterparts in CDG. And well, they were helpful and as a special case I was allowed to show up at the Emirates counter latest, by 1.45 pm as the flight was to depart at 2.20 pm. I ran up to the Captains again, and asked the approximate time of arrival in CDG and they said, maybe 1.30 pm and shrugged again!!

I mentally ticked myself off for agreeing to such a close connection and hoped that the train would indeed reach CDG, as promised by the Captains. Soon enough the train started but began moving in the reverse direction!! I pretended to be calm outwards but I was simply turning pulp inside. There was a lady who gestured to me with her palms together and looked up... yes, prayers was all I could do. I ran up to to the Captains again and they said that the train was going back a few stations to take another track, meant for slower trains and will eventually head to CDG.

And yes, the train did pull into CDG at 1.35 pm, I ran out with luggage and back pack, all the way up the escalators, travelators, like in the movies, and reached the Emirates counter, panting and sweating at 46 F, at 1.46 pm, and the counter was closed. Finally, I mentioned the name of the Emirates staff who had spoken to her Indian colleagues and they let me through. It was the huge, Airbus A380 and passengers were still boarding through the multiple entry points and I was the last to board mine.

Its now six months since that journey but I can remember every emotion that I went through that day.

I could feel your pulse Raji. Well done

Hats off to you, Raji! You are really really cool. I have lots to learn from you.